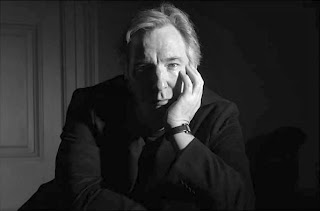 Alan Sidney Patrick Rickman was born on February 21st 1946 in Acton, West London to a Welsh mother called Margaret and an Irish father called Bernard. He had an older brother (David), then a younger brother (Michael) and sister (Sheila). He enrolled at the Chelsea College of Art and Design where he met his partner Rima Horton and later spent a year at the Royal College of Art. He founded an amateur acting group with Horton called the Brook Green Players.

He formed a graphic design company with friends and continued working in this field until the age of 26, when he wrote to the Royal Academy of Dramatic Arts (RADA) and received a scholarship. After RADA, he took a number of acting jobs around the UK in a variety of comedies, dramas and musicals.

He then joined the Royal Shakespeare Company (RSC) for a year, appearing in The Tempest, Love’s Labour’s Lost, and Antony and Cleopatra, before returning to rep. He made his TV debut in 1978 as Tybalt in Romeo & Juliet. This was followed by roles in Thérèse Raquin, Smiley’s People and an adaptation of Anthony Trollope’s The Barchester Chronicles, as the Reverend Obadiah Slope.

Between 1985 and 1987, Rickman played the Vicomte de Valmont in Les Liaisons Dangereuses in London and then on Broadway, where he was nominated for a Tony award. When a film version was made, he was denied the same role, which instead went to John Malkovich. However, producer Joel Silver had seen his performance and asked him to star in Die Hard opposite Bruce Willis. This was Rickman’s first movie appearance and his role as the villainous Hans Gruber, thwarted by Willis’ cop John McClane, set the standard for British actors playing the bad guys in Hollywood films. 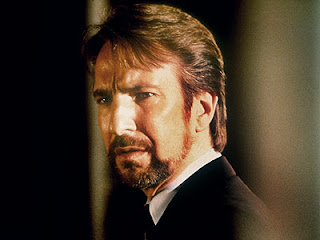 In 1990, Alan starred in Anthony Minghella’s Truly, Madly, Deeply opposite Juliet Stevenson. Then he played the flamboyant and devilish Sheriff of Nottingham in Robin Hood: Prince of Thieves, for which he won a BAFTA. He appeared in Ang Lee’s Sense and Sensibility, with Kate Winslet, Hugh Grant and Emma Thompson, who also wrote the screenplay for the film, adapted from Jane Austen’s novel. Then Rickman took up directing duties for The Winter Guest starring Emma Thompson.

He was on fine comedic form playing Metatron, the voice of God, in Kevin Smith’s Dogma and Alexander Dane in the spoof sci-fi film Galaxy Quest with Tim Allen and Sigourney Weaver. In 2001, Rickman starred in the first film in the hugely successful British fantasy series adapted from J.K. Rowling’s Harry Potter books. He took on the role of Professor Severus Snape in Harry Potter and the Philosopher’s Stone and would star in the subsequent seven movies as well. 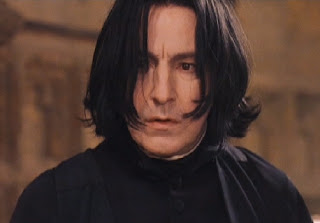 Alan stayed true to his roots, remaining committed to the British stage, and in 2003 he was named Vice Chairman of RADA. He joined an all-star cast for Richard Curtis’ Love Actually, which included Hugh Grant, Emma Thompson, Colin Firth, Liam Neeson and Bill Nighy. He then voiced Marvin the paranoid android in The Hitchhiker’s Guide to the Galaxy and reunited with Sigourney Weaver for the touching drama Snow Cake.

Rickman worked with Tim Burton for the movie adaptation of the musical Sweeney Todd: The Demon Barber of Fleet Street, which saw him singing with Johnny Depp, and Alice in Wonderland, where he provided the voice for the Blue Caterpillar.

Rickman recently starred in both parts of the final Harry Potter film, and will next be appearing in Gambit, written by the Coen brothers. The film, which is due in September 2012, follows an art curator who cons a wealthy collector into buying a fake Monet painting, and also stars Cameron Diaz and Colin Firth. 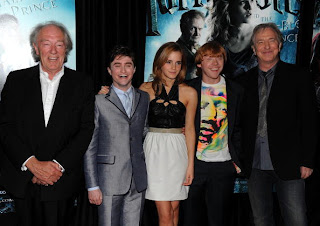