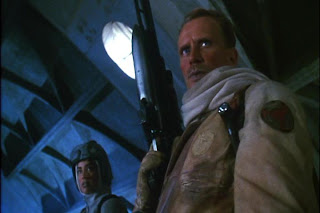 In the year 2078, the distant planet Sirius 6B has become a vast wasteland, devastated by war. What was once a mining planet, controlled by the N.E.B. Corporation, became a warzone. The miners and scientists discovered operations were causing deadly radiation and refused to continue. The N.E.B. sent forces to change their minds. Autonomous robots called ‘Screamers’ were developed for the miners by an alliance on Earth to help neutralize the war. However, after they dumped them on the planet and left, these robots began multiplying and have now developed new, modified versions, which hunt down any living creature with only one aim: to kill.
World-weary commander Hendricksson (Peter Weller), leader of the small force left on the planet, receives peace terms delivered by an N.E.B. messenger, who is unfortunately torn to shreds by Screamers just outside their base. A military transport ship then crashes nearby, a ship which had claimed to be a civilian vessel and had asked for permission to land. There is only one survivor of the crash, a young soldier called Jefferson, who tells them their war on Sirius 6B has been forgotten about on Earth. The N.E.B. Corporation has discovered ore on another planet and has set out to claim it, leaving Hendricksson and the other survivors here to grow old. They certainly wouldn’t want them returning to Earth where they could tell all about how they have been treated. Hendricksson decides there is no point in fighting anymore and sets out with Jefferson to the N.E.B. headquarters to make peace with the other people on the planet. The only thing standing in his way is the Screamers that were created to help his side. And he discovers the modifications they have made are far superior to what he could have imagined, there are even some that seem almost...human. 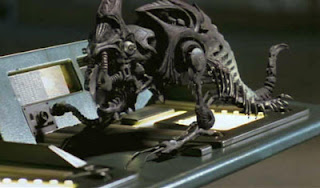 Screamers has an interesting, multi-layered plot, with lots of twists and turns. The screenplay was co-written by Dan O’Bannen, who also co-wrote Alien and Total Recall. The paranoia and ambiguity of not knowing who to trust are effective, if a little over-played in the final scenes. Peter Weller is well-suited to the worn and heroic figure of Hendricksson, a man forgotten about on a distant planet. The dialogue is also note-worthy, his dry wit and sarcasm fit the character perfectly. When Becker (one of the N.E.B. soldiers, with a penchant for Shakespeare) quotes: “When he's best, he's a little worse than a man, and when he's worst, he's little better than a beast." Hendricksson replies: “Oh, that's real good, Becker. I never knew they put Shakespeare in comic books.”
Overall, the film shows us a great vision of a futuristic dystopia, where big corporations travel the solar system in search of resources and riches. The deceit and betrayal suffered by our protagonist provide a sense of despair and isolation. And the Screamers add threat, uncertainty and fear. All of these elements combine to make this an intriguing film about one man’s fight for survival when all hope seems lost.