Review: The Girl who Kicked the Hornet's Nest

The final part in the trilogy of Swedish film adaptations of Stieg Larsson’s Millennium novels, starring Noomi Rapace as ‘the girl’ of the title and Michael Nyqvist as the journalist who tries to help her. Although not as enthralling as the first film, it is an improvement on the second instalment. What is notable is the change in genre as the series progresses. ‘Dragon Tattoo’ was more of a crime thriller, with twists and turns, mystery and intrigue. ‘Played with Fire’ had lots of action scenes with our heroine on the run. ‘Hornet’s Nest’ is a slower paced film, a courtroom drama.
There is less interaction between the two main characters, which were enjoyable moments in the first film. Here, Mikael is working hard to make sure Lisbeth doesn’t go to prison, they hardly meet and when they do, you wish more would happen. Saying that, the ending is satisfactorily anti-Hollywood, which stays true to the characters’ personalities and feels natural.

Lisbeth Salander spends much of the film recovering in hospital. A conspiracy against her leads to her being accused of crimes she hasn’t committed and threatened with detention in a mental institution. Mikael’s sister offers to represent her in court. Mikael and his team at the magazine ‘Millennium’ plan a special issue to reveal the conspiracy and bring those behind it to justice. He hopes to clear Lisbeth’s name so she can be a free woman and finally start to overcome the terrible torments she has suffered in her life. 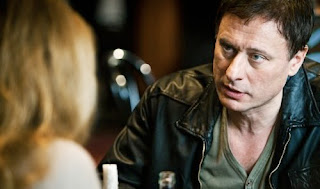 As if to accentuate the fact that Lisbeth is at times morally ambiguous, the other characters in these films seem to be either extremely righteous or completely evil. Mikael, his sister, and the doctor who looks after Lisbeth in hospital are contrasted with the psychiatrist Dr Teleborian, Niedermann and Zalachenko. Lisbeth, our central character in the story, is placed at the centre with totally good and totally bad people surrounding her. This makes her highly complex and conflicting nature all the more fascinating.
Lisbeth and Mikael seem to be given a lot less to do in this final film, than in the previous ones. There are less memorable, stand-out moments where they really impress. Although there are many, more subtle occasions; when Lisbeth glances at Mikael in the courtroom, when a wry smile crosses her lips, and these stay with you too. After growing to care for and understand these characters, you can read every small expression and obtain something significant from it.
The Girl who Kicked the Hornet’s Nest is a very fitting end to the trilogy. Although it isn’t as impressive as the first (which works as a brilliant stand-alone film), it is definitely recommended for fans and those wishing to see the story through to its conclusion. The outcome of the trial provides this courtroom drama, and the trilogy as a whole, with a pleasing sense of closure as all secrets are revealed and all loose ends are neatly tied up.