(Note: this review is based on The Final Cut and contains SPOILERS)
Ridley Scott’s dark, dystopian film set in a future Los Angeles is a visual masterpiece. The rain-drenched city with its towering skyscrapers reaching up to the clouds of smog overhead, contrast with the bright neon lights and huge, colourful advertising screens. There is an over-populated, claustrophobic feel on the ground, with a strong Asian influence resulting from a blending of cultures. Every scene is mostly shadow, with minimal light used to highlight the key areas of interest, and smoke drifting and twirling atmospherically. The beguiling soundtrack by Vangelis complements the action perfectly.
Our main focus here is Rick Deckard (a moody Harrison Ford), the ‘Blade Runner’ of the title. He was a bounty hunter who tracked down replicants (artificial humans) and ‘retired’ (some would say ‘killed’) them. He quit his job but is called back into action to stop a group of Nexus-6 replicants that mutinied, killed their captors and escaped to Earth. These replicants are used as slaves on distant planets for a variety of jobs: combat, heavy lifting, some even for pleasure. They attempted to infiltrate the Tyrell Corporation (a genetic development company which created them) in order to find a way to extend their limited 4-year life span and two of them got “fried”. Four replicants remain and it is up to Deckard to find them.
During a visit to the huge, pyramid-shaped Tyrell building, Deckard meets another replicant named Rachael (Sean Young). As she had been implanted with memories, she believed she was human, until Deckard carried out the Voight-Kampff test on her and confirmed otherwise. A series of questions designed to elicit an emotional response are asked, and subjects are judged on their answers and physical reactions. New types of replicants such as the Nexus-6 are becoming harder to detect because of these fake memories and the capability to develop emotions.
After two of the replicants, Leon and Zhora, are retired (one by Rachael, who saves his life), Deckard is left with a hard challenge: Pris (Daryl Hannah), and the one seen as their leader, Roy Batty (Rutger Hauer giving his best performance). He has been told by his boss that he must also retire Rachael but he cannot do so because he has fallen in love with her. Pris and Roy have found shelter with J. F. Sebastian, a genetic designer who works for Tyrell. He has a disease which accelerates his aging process and as a result is not allowed to emigrate off-world as many of the population have. He takes a shine to Pris and sympathising with their plight, agrees to help Roy meet his maker, Tyrell. The “prodigal son” returns home and Roy demands a longer life. Tyrell explains that this isn’t possible: "The light that burns twice as bright burns half as long, and you have burned so very, very brightly, Roy." Angry and frustrated, Roy kills Tyrell and then Sebastian.
Meanwhile, Deckard makes his way to Sebastian’s apartment where Pris is waiting. She blends in with the toys that Sebastian made as his friends. After a close call, he shoots her with his laser gun, ‘killing’ her. Now only Roy remains, but he will be Deckard’s greatest trial. The huge dilapidated apartment building where he stalks the last replicant is rundown and abandoned. Water drips down the walls as he moves silently and alone. We see his laser gun fill the whole screen, just as Roy’s arm bursts through the wall and grabs him. After having his fingers broken, Deckard escapes his grasp. He realises that he may have met his match this time. Inside the building it switches between near darkness and bright, searching spotlights from the hovercraft outside. Roy howls like a wolf, signifying that the hunter has become the hunted. Deckard’s job may have been to find and retire the replicants but now he is fleeing for his life.

Deckard climbs up through the ceiling, outside, and onto the roof. Thunder booms, lights flash, and there is the sound of bells tolling...but for whom? Roy appears and Deckard attempts a leap across to the next building. He misses and is left to hang uselessly from the edge. Roy, realising that his own time has come, catches his arm and saves him. He sets him down safely on the rooftop and gives a beautiful final speech about all the things he has witnessed in his short time, all the memories that will now be forgotten. "I've seen things you people wouldn't believe. Attack ships on fire off the shoulder of Orion. I've watched C-beams glitter in the dark near the Tannhäuser Gate. All those...moments will be lost in time...like...tears...in rain. Time...to die." 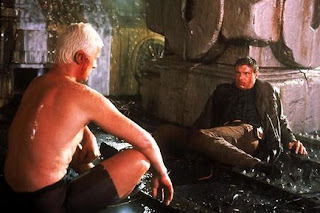 Deckard is victorious, but we don’t feel like celebrating. The final confrontation is atypical of most good guy/bad guy fights in action movies. For one thing, Deckard would have lost if it weren’t for a final display of humanity from the replicant. In the end, we are made to sympathise with Roy. He was used as a slave and was just trying to escape his fate, in another story he may well have been the hero.
In the final scene, Deckard leaves with Rachael, the words of a colleague echoing around him “It’s too bad she won’t live. But then again, who does?” This film questions what it means to be alive. The defining trait of the replicant used to be that it was emotionless. Yet many humans act selfishly and without emotion, and these replicants had feelings and showed compassion. The lines between man and machine become very blurry by the end, with some questioning whether the cold, reluctant bounty hunter is a replicant himself.