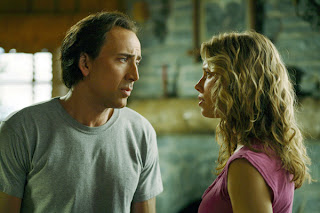 Lee Tamahori (Die Another Day) directs this action sci-fi film, which follows the story of a man named Cris Johnson (Nicholas Cage). Cris is a magician with a show in Las Vegas under his stage name, Frank Cadillac. He has a special ability to be able to see two minutes into his future, which means he is never surprised by what’s coming up and he can always keep one step ahead. This comes in handy when an armed robber tries to steal from the casino where Cris has been gambling (although it’s not really gambling if you know the outcome already). Cris disarms him but is then chased by the casino’s security, who believe the gun to be his. This is an exciting start to the film, as we see him constantly outwitting the men and coolly escaping right from under their nose.
It is then revealed to us that the FBI is also hunting for Cris. They need him to help them stop a European terrorist group who plan to detonate a nuclear bomb. Their team is headed by Julianne Moore’s character, Callie, who seems very uptight and stressed throughout the film. She puts a lot of faith in Cris’s abilities, which conflicts slightly with her stern, level-headed character. It doesn’t seem likely that she would have believed someone could see the future. Also, it isn’t explained how the FBI came to learn of his power or why they believe it to be genuine – they just do. It’s unclear what they expect him to be able to do, unless the bomb is going to explode next to him in the next two minutes, he’s pretty much useless anyway. It often seems as though they would have been better off spending their time finding intelligence about the terrorists instead of relying on a magician to help them.
Another plotline in the film follows Cris searching for a woman (Liz, played by Jessica Biel) he saw, a lot further into the future than he can normally see. They finally meet, and after many failed attempts to have a conversation with her (all of which are alternative futures for Cris, paths he could have taken but didn’t) he finds that getting punched in the face is the quickest way to a girl’s heart. He discovers that while he is with Liz his ability is increased. 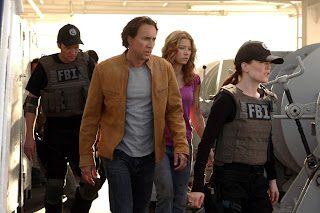 The European terrorist group are vastly under-written, with unclear motives, and they seem very stereotypical. This is a shame for the German actor who plays their leader, Thomas Kretschmann, who has had supporting roles in Resident Evil: Apocalypse, King Kong and Wanted.
Next is an often frustrating film to watch. In a number of scenes you realise what has just occurred didn’t actually happen, and you are taken back to an earlier point in the film and made to start over from there. These moments of premonition could have been filmed better, as they are intended to be interesting and innovative, yet they make you feel cheated. Showing these flashes of an alternative future is out of the ordinary for a film, but if an audience doesn’t know whether what they are watching is the real thing or not, they will quickly become detached and isolated from the main character they are supposed to be relating to. I think the ending of the film probably annoyed a lot of viewers too. It was clearly meant to be a clever idea but felt a bit of a sell out.
Although the film showed a lot of promise at the start, and the scenes in which he utilises his power (for example, his escape from the FBI mid-way through) are impressive, its two main components (his two minute visions and the threat of the bomb) don’t fit together well. Ultimately, it is a reasonable action film with an appealing added extra, but it leaves you feeling a bit dissatisfied, and the early promise isn’t entirely fulfilled.