Fred (Keanu Reeves) is an undercover narcotics agent. He is also Bob Arctor, who lives with his drug-addled friends, all under the influence of Substance D - a highly addictive and dangerous drug, also known as ‘Death’. This film explores the implications of drug taking and portrays events in a wonderfully hypnotic and hallucinatory way. 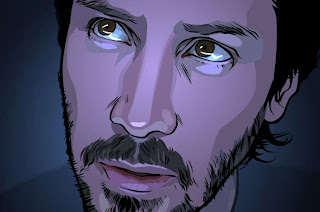 Underneath his scramble suit (an outfit that allows his identity to remain secret because it projects millions of different images of various people’s body parts so that he never looks like the same person) Fred carries out his work unnoticed. Things get very confusing and difficult for him when he is asked to spy on Arctor and his friends in the hope of finding out the identity of a big drug supplier. He is ordered to run surveillance on his house, which he shares with Jim Barris (Robert Downey Jr) and Ernie Luckman (Woody Harrelson). There is also the matter of the dodgy corporation ‘New Path’, which promotes Fred’s work and sponsors the conference he addresses. It has an exclusive, lucrative contract with the government to supply detox and rehabilitation services. But its real involvement with Substance D is not all too clear.﻿﻿﻿﻿
On top of a very complicated relationship with drug dealer Donna Hawthorne (Winona Ryder) and Barris turning informant on Arctor, there is also suspicion that Arctor has become too addicted to Substance D, causing his brain to be impaired. We’re viewing most of these events from his point of view, but are we seeing a true account, or is this all the creation of an unravelling mind?
﻿﻿ 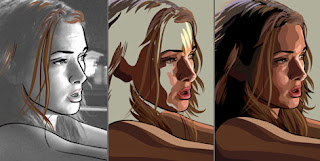 Undoubtedly one of the main selling points is the unique ‘look’ of the film. Director Richard Linklater utilized the talents of animator Bob Sabiston, who also worked on his previous film Waking Life. Sabiston used the visually striking technique called ‘rotoscoping’ whereby live action performances are transformed into animated ones by tracing each frame of film. Linklater is the first director to use digital rotoscoping to create an entire feature film. This technique is a great visual metaphor for the paranoia and detachment prevalent in the film. The cartoon-like veneer is very relevant for characters questioning reality and gives us a view into their drug-addled, hazy outlook on life.
One downside to the remarkable animation is that it is sometimes too eye-catching for its own good. Occasionally you may find yourself distracted by the visuals and realise that you haven’t been fully focused on following the complex narrative of the film, which might leave you a little lost.
All in all, A Scanner Darkly is a funny, intriguing film, full of twists and turns. Due to its complicated nature, it may not be appreciated by mainstream audiences looking for a bit of light relief. At times, it isn’t involving enough and fails to fully capture the viewer’s emotions. But its themes of identity, of what is real and what is not, and the film’s mesmerising graphics ensure a memorable experience.