The film chronicles the major events that take place during a year for married couple Tom and Gerri (Yes, they’ve learned to live with the whole Tom and Jerry thing), and their friends and family. As we follow the ups and downs through the four seasons, 'Spring’, ‘Summer’, ‘Autumn’, and ‘Winter’ flash up on screen to show the changes and handily indicate how far along the film is. This gives a sense of structure to proceedings and each season includes different events and themes. Spring introduces us to the main characters, shows them at work and their interactions with each other, most are light-hearted and hopeful. Summer of course means a BBQ, which brings the characters together at Tom and Gerri’s. Autumn is the start of a new relationship for one of the characters, and the cause of a rift. Winter takes Tom and Gerri up north for a funeral, a family member comes to stay and it is hoped old wounds will at last start to heal. 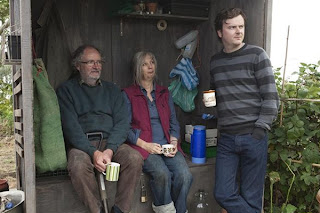 Tom and Gerri are the heart and soul of Another Year. Although they are nearing old age, they haven’t lost the love and affection that has kept them together for most of their lives and they are very kind and compassionate towards each other. They seem to be the lucky ones in this film full of unlucky people. They have a great relationship with their son, Joe, who is a good-humoured and warm character. As all Mothers do, Gerri often questions him about marriage. At the beginning of the year he reveals that another of his friends is getting married and he seems worried that he won’t find anyone. But he brings bubbly Katie home in the Autumn to meet his parents and they seem to get on really well.
There are a number of supporting characters in Another Year who offer a contrast to Tom and Gerri’s happily married family life. Most notable of these is Mary (played by Lesley Manville), Gerri’s friend from work. She lives alone in a flat, drinks and smokes too much and often makes a fool of herself. She has clearly had a miserable life and is scared of a future filled with loneliness. Manville does a great job expressing her character’s sadness and desperation. Imelda Staunton’s short appearance in this film is also very memorable. She plays Janet, a depressed insomniac who doesn’t want to talk about her problems. A tragic and upsetting character, she visits Gerri for counselling and then is forgotten about, leaving the audience with many unanswered questions about her well-being and her purpose.
With performances that stay with you long after you’ve finished watching, Mike Leigh’s Another Year isn’t exactly an enjoyable film, but his clever observations and the emotional resonance he creates have a profound effect, making this one of his most successful achievements.