Shot from the Screen: Hard Target


Shot from the Scene: Grabbing a rattlesnake just as it is about to bite his female companion, Boudreaux punches it in the head, rendering it unconscious. He then bites off its tail and leaves it as a booby trap for the hunters on their trail. One triggers the trap and the very angry snake is launched at him, striking with its deadly poisonous fangs. A unique and classic Van Damme moment. You may have seen him kickboxing on many occasions, but you don't often see him PUNCHING A SNAKE! 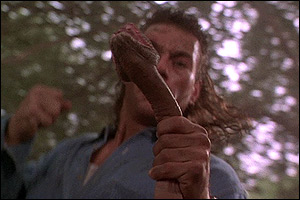