A Scanner Darkly is the most accurate film adaptation of a Philip K. Dick story that I have seen so far. Many of the scenes have seemingly been copied straight from the book. However, in creating a more faithful adaptation, director Richard Linklater has distanced his film from mainstream audiences. Unlike other directors who have transformed Dick’s works into movies, like Ridley Scott (Blade Runner) and Steven Spielberg (Minority Report), who modified his stories to fit their personal vision, created their own worlds and made his material more accessible to a wider audience, Linklater hasn’t altered the story at all.

“Any given man sees only a tiny portion of the total truth, and very often, in fact almost perpetually, he deliberately deceives himself about that little precious fragment as well. A portion of him turns against him and acts like another person, defeating him from inside. A man inside a man. Which is no man at all.” (Page 147).
There are a number of extra moments in the book, which the film obviously didn’t have enough time to add in. Barris researches mushrooms and tries to sell some as hallucinogens, which may be fatally toxic. During the road trip, Arctor pays a visit to Kimberley Hawkins, an individual he hasn’t seen in a while, to check up on her. These aren’t in the film but aren’t vitally important and have no real bearing on the story.
An interesting device used in the novel is interspersing events with other unrelated facts, dialogue or moments from the past. When Fred meets with the two medical deputies, the dialogue is combined with memories they remind him of and medical articles about the mind. This shows the muddled up nature of his brain, affected by drug use and paranoia. There are also moments in the book when the text is interspersed with lines of German that aren’t explained and seem completely random. When Fred views some of these moments back on one of the Holo-Scanners he uses for surveillance on his house, he hears Arctor reciting, partly in German. This is a very remarkable method used by the author. At first it is quite baffling, as we witness events from Arctor’s point of view and there is no explanation for the lines of German that seem totally out of place. Then when we are with Fred viewing the events back, we realise what they signified. It represents how strange and incomprehensible things are, the mindset of the characters, and why we can’t even believe that what we are reading is what truly happened. It makes reading A Scanner Darkly a very interesting and unique experience. 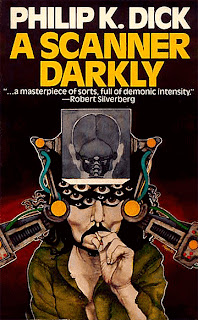 The fact that it is very successful as an adaptation seems to have caused it to be unsuccessful in terms of attracting a large audience. This suggests that Philip K. Dick’s works are not readily welcomed by mainstream viewers in their pure, undiluted form.
Posted by Emma at 05:19