Whereas Screamers (the film adaptation based on the Philip K. Dick short story Second Variety) takes place on another planet, the story itself is set on Earth, a world that has been destroyed and ravaged by war. Instead of the two sides fighting because of a dispute over mining resources, it is Americans vs Russians, an idea which would have seemed a lot more relevant at the time of writing than it is today. A nuclear war between the two nations has transformed the surface into an almost uninhabitable wasteland. For the film this was changed and updated, it was set on a different planet (Sirius 6B) where scientists and miners working for the N.E.B. Corporation refuse to continue work after they discover the mineral gives off radiation during the mining process. War breaks out between the workers and the N.E.B. who want them to keep mining. 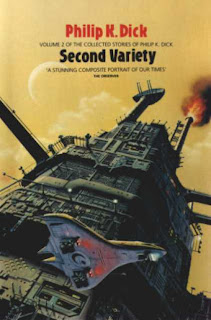 One of the main characters in the film, the young soldier Jefferson, does not appear in the story. Instead, Hendricks (as he is known in the story, changed to Hendricksson for Screamers) as commanding officer, sets out on his own with the hope of bringing an end to the war.
Philip K. Dick said of this story, "My grand theme: ‘who is human and who only appears (masquerading) as human? ‘ emerges most fully. Unless we can individually and collectively be certain of the answer to this question, we face what is, in my view, the most serious problem possible. Without answering it adequately, we cannot even be certain of our own selves. I cannot even know myself, let alone you. So I keep working on this theme; to me nothing is as important a question. And the answer comes very hard."

The film has essentially kept the same themes and ideas that are present in Second Variety, it has just placed events in outer space on another planet instead of on Earth, added a couple of extra characters and changed the end of the film. Most of these additions are welcome, except maybe for the final moments of Screamers, where too many alternative endings are all used at once. This gives the impression that the film is trying too hard to include lots of twists to boggle the minds of the audience, when just one twist (as in the short story) would probably have had a greater, subtler effect. All in all though, both the short story and the film are successful works which can be appreciated separately but also complement each other.
Posted by Emma at 08:00