Douglas Quail dreams of Mars. He is very similar to Douglas Quaid, of Total Recall, in that respect. However, unlike his on-screen counterpart, the protagonist of Philip K. Dick’s short story We Can Remember it for You Wholesale keeps his feet firmly on Earth. Yep, that’s right; none of the events that take place on Mars in the film are present in the story. 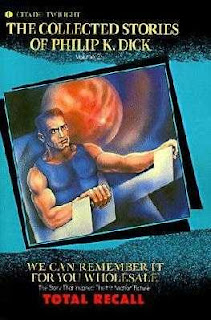 Even though much of the content of the film isn’t in the short story it is based on, there are still elements in it that stay true to Philip K. Dick’s themes and ideas. A man who is hunted and on the run appears in a lot of his stories, as well as classic questions of reality. What is part of the implanted memory and what is real? Is this all in Quaid’s head? Is he the good guy or the bad guy? You still get that same feeling you get when reading Dick’s work; that you can’t be complacent because any moment he will turn everything on its head.
“He awoke – and wanted Mars. The valleys, he thought. What would it be like to trudge among them? Great and greater yet: the dream grew as he became fully conscious, the dream and the yearning. He could almost feel the enveloping presence of the other world, which only Government agents and high officials had seen. A clerk like himself? Not likely.” (Page 157 of Volume 5 of the Collected Stories). 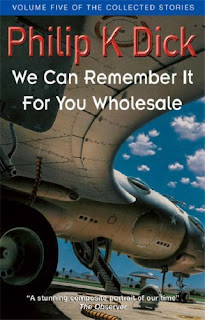 In We Can Remember it for You Wholesale, Quail goes to have the memory of Mars implanted, only for the men carrying out the procedure to find that he actually has been to Mars, and this memory has been buried deep by the government. The men at Rekal, Incorporated send Quail home without grafting the fake memory and when he comes around, he can remember a trip to Mars as an undercover agent but it is hazy and vague, and he believes something went wrong with the procedure. A policeman shows up at his apartment, who tells Quail a telepathic transmitter is wired within his skull, which tells them all of his thoughts. He knows too much about his past as an agent and he must be killed. As a final measure, Quail desperately suggests they imprint a false-memory as they did previously, and implant another memory, something which would be enough to satisfy his craving for Mars, which seeped through before. A psychiatrist discovers an interesting fantasy buried deep in his mind, one different to wanting to be an undercover agent. One in which he stops an invasion of small alien creatures, by showing them kindness and mercy, and they make a covenant with him not to invade Earth while he is alive. However, when they try to implant this memory, it turns out this one also happened for real… and that is how the short story ends.
Both the short story and the film are appealing in their own ways, although very different from each other. All the events that take place after Quaid leaves Rekall in Total Recall are not Philip K. Dick’s ideas, but they do follow similar themes and there are some great sci-fi moments, so this makes for an interesting comparison.
Posted by Emma at 08:06

Email ThisBlogThis!Share to TwitterShare to FacebookShare to Pinterest
Labels: blogathon, Philip K Dick, total recall, we can remember it for you wholesale