Shot from the screen: X-Men 2

Screenshot: Nightcrawler causing a disturbance in the White House


Shot from the scene: At the beginning of the second X-Men film, we are introduced to new mutant, Nightcrawler, in an amazing scene. The blue-skinned man, with scars and a tail, manages to infiltrate the highly guarded White House using his teleporting skills. He is almost able to carry out an assassination on the President but he is stopped at the last minute, and disappears before capture. He leaves behind only his knife, with the message 'Mutant Freedom Now' 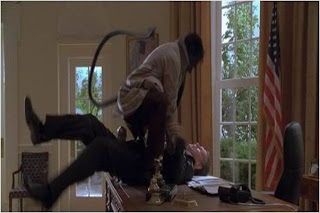