Douglas Quaid (Arnold Schwarzenegger) dreams of Mars and a pretty brunette. On the metro he sees an advertisement for Rekall, a place where memories of trips of a lifetime can be implanted into your mind. He goes to check it out even though his friend at work warns him against it. Something goes wrong while he is being prepared for the procedure, which could make him regret disturbing his peaceful, ordinary life as a construction worker in order to chase his dreams. He chose to be a secret agent on Mars but then he starts rambling about it before he’s even been implanted. Was he really a secret agent previously and had his memory covered over by the government? The people at Rekall don’t want any trouble and they wipe the memory of his appointment there and bundle him off in a cab. 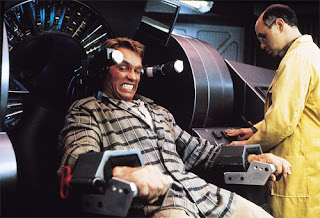 When he comes around in the cab, his whole world starts to fall apart. He doesn’t know which people he can trust and who is telling him the truth. He can’t even trust his own memories. His friend from work tries to kill him, he goes on the run and receives help from a mysterious figure who leaves him a briefcase. Inside there is a video message from himself, who tells him he must get to Mars. Easier said than done for a hunted man to journey to a planet in the midst of a revolutionary war, as a small group of rebels and mutants fight back against the tyranny of industry leader Cohaagen (Ronny Cox).
Total Recall is a lot more than it first appears to be. Don’t expect a typical action movie with Arnold Schwarzenegger, this film is intelligent, complex and rich in detail. It’s science fiction aspects are more prominent than it’s action set pieces (although those are impressive too); the visual details of the future world of Earth and the station on Mars, and the overwhelming themes of reality and memory are the stars here. The film expertly plays with the possibility that the plot which unfolds is taking place in Quaid’s head, and all the scenes are memories that have been inserted, just like he asked for. The audience is never really sure whether there’s going to be a twist at the end, which sees him wake up from the procedure after believing he experienced the artificial moments first-hand. 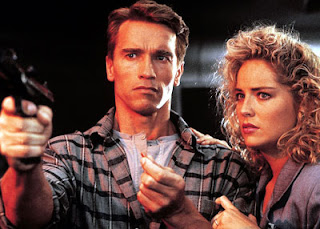 There is a stand-out scene in the film where Quaid is visited by his wife (Sharon Stone) and a doctor, claiming they have been inserted into his memory in order to help him. They tell him he has become too involved in the implanted memory and he is in danger of losing his mind. He wrestles with the choice of believing them, until he sees a bead of sweat on the doctor (his nerves getting the better of him as he tries to make a lie seem believable).
There are moments where the effects or the science don’t stand up to scrutiny, such as when Quaid and his dream girl (Rachel Ticotin) swell up and their eyes start to pop out cartoon-style, when they are outside on the surface of Mars (the lack of an atmosphere apparently has that effect on you). However, these are minor negatives, and Total Recall should be appreciated as an intelligent and exciting sci-fi/ action film with good performances. Its twisting, thought-provoking story never lets up on pace as it unfolds.