This is the fourth feature film from Mexican auteur Alejandro González Iñárritu, following Amores Perros (2000), 21 Grams (2003) and Babel (2006). Biutiful stars Javier Bardem, who won an Oscar for his performance in No Country for Old Men back in 2008. He was nominated for Best Actor for this film but lost out to Colin Firth and the mighty, multi award-winning The King’s Speech. However, this did mark the first time that a Spanish language performance had been nominated for a Best Actor Oscar at the Academy Awards.
Bardem features in the central role of Uxbal, and Biutiful is a long film about one man’s struggle. He struggles with many things; illness, poverty, fatherhood, crime, guilt, mortality. It is a stark and intimate portrayal of a man who is told he has only months to live, after being diagnosed with terminal and inoperable prostate cancer. 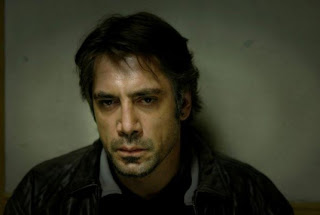 Many will find the film dull and depressing; it certainly can’t be called an entertaining film. It is at times awkward and uncomfortable to watch. However, others will appreciate the character study and the towering performance of Javier Bardem. We are given a window into Uxbal’s life in his final months and there is plenty of intense and heavy emotion. At almost two and a half hours long, the film drags, especially as it is such a slow-burn as well. It feels like an emotional marathon, and would have benefitted from being cut to less than two hours.
Uxbal is searching for redemption throughout the film, trying to tie up loose ends and make sure his two children can go on without him. He is a petty criminal in the Barcelona underworld, a kind of middle-man who deals with illegal immigrant labour. He also has a strange sideline in talking to the recently deceased and lifting their relatives’ grief. We feel for him, even though he isn’t a wholly sympathetic character, as there are dark aspects of his personality. However, he is the tragic hero of the story and this doomed man holds the film together. The many close-ups of Bardem’s tired, concerned face portray deep emotion and it is a really heartfelt performance. There are also good turns from Maricel Álvarez as Uxbal’s estranged wife and the mother of his children, who herself is struggling with psychological problems, and Eduard Fernàndez as his brother and partner-in-crime. 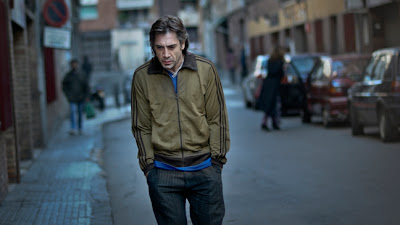 One of my favourite moments in the film comes when a scene from early on is repeated at a much later point, but viewed from a different angle so you don’t quite realise it at first. It is as if Uxbal is watching the events from a different perspective, like he is revisiting the moments in his life, remembering them as his final months come to an end.
Rodrigo Prieto, the cinematographer for Biutiful, does a great job of depicting the harsh naturalism of the environment. He worked on Iñárritu’s previous three films, as well as Brokeback Mountain, State of Play and Frida. Here he effectively portrays the dark, dingy and dangerous underworld and creates an intoxicating vision of doom.
Throughout the film, as we watch this man’s demise, the audience knows there is only one way it is going to end. That heavy feeling, and some aspects of the story, threaten to drag the film down. However, a truly masterful and heavyweight turn by Javier Bardem lifts it, even if he isn’t quite backed up by the material.