Bunraku is set in a world that has been ravaged by fighting and war. After an animated opening sequence detailing how it has changed, including the banning of guns by the new civilization, we are shown a dystopian setting where the majority of the action takes place. A theatrical fight scene introduces a group of assassins led by the smooth-talking but deadly Killer #2 (Kevin McKidd). These men work for Nicola (Ron Perlman), a man known as the Woodcutter, who never shows his face in public. He is the most powerful man east of the Atlantic and uses his Red Suits and Killers to rule the town, while having its officials over for exclusive poker games.

Two mysterious men arrive in town on the same train, one a nameless drifter (Josh Hartnett) and the other a samurai called Yoshi (Japanese pop star and actor, Gackt). They both find their way to a bar called The Horseless Horseman, and after initially taking a dislike to each other, the Bartender (Woody Harrelson) persuades them to work together. The two men share a common goal, both are out for revenge and Nicola is their target, although they have different reasons for hunting him down. By featuring an honourable samurai warrior and a gunless cowboy as the main protagonists, the film effectively blends heroes from east and west cultures. 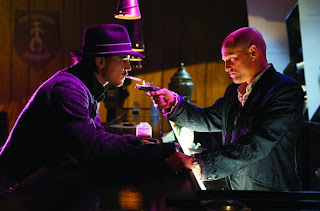 Bunraku was written and directed by the Israeli-born filmmaker Guy Moshe. It is the follow-up to his debut child trafficking film Holly. The title is based on a 400-year-old form of Japanese puppet theatre, operated by puppeteers who dress all in black so they blend into the background. The film does often feel as though it takes place on a stage, with theatre-inspired sets and scenery that looks like it’s made out of paper.

Walls and backdrops pop up and fall, green screens provide CG backgrounds and the virtual origami-like world is reminiscent of a pop-up book. Coincidentally, Woody Harrelson’s Bartender makes pop-up books as a hobby and shows Yoshi the one he is working on, which bears some resemblance to Spider-Man’s origin story. This unique visual style extends to impressive special effects and animation sequences, used to switch from one scene to another and enhance certain moments in the film. The stylish aesthetic includes subtitles that look like they’ve been lifted from comic book panels. 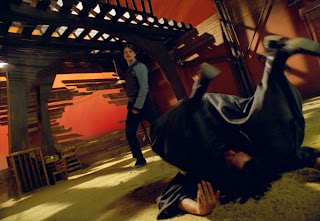 Bunraku’s interesting and innovative blend of techniques and genres makes it hard to categorize. The film draws inspiration from many different areas and is a genre mash-up of spaghetti western, martial arts, revenge thriller, noir, fantasy, mafia, musical (without the songs), and adds elements from video game and comic cultures too.

The film has a great cast and is narrated by Mike Patton (former singer of Faith No More). Kevin McKidd clearly relishes his flamboyant and devious role as the villain’s right-hand man and Woody Harrelson provides some good humorous moments. Demi Moore is underused as Alexandra, Nicola’s woman who has a mysterious past. One scene shows how she is linked to the Bartender, but this isn’t expanded upon and her character ultimately feels a bit unnecessary. This quirky and unique film is not for everyone as some may find the mix of genres confusing and disjointed. However, others will find this oddness refreshing, the visual style striking and the story a fun, modern tale of good vs. evil.

See more of Josh Hartnett at LOVEFiLM.com, where you can choose from over 70,000 titles to rent and now, movies to watch online.
Posted by Emma at 06:39