The many movie deaths of Gary Oldman

As a big fan of Gary Oldman, I've seen most of the films he has starred in. He's always a joy to watch but I have noticed that many of his great performances end with his characters' demise. Out of those that I've seen, this has occured 17 times.

During his early career, this can be attributed to him choosing roles where he portrayed real-life figures whose deaths were well-known, e.g. Sid Vicious, Joe Orton and Lee Harvey Oswald. In the 1990's, Oldman had a stint as the bad guy in a number of films and of course, baddies must always be defeated. He met his end in Bram Stoker's Dracula, Leon, The Fifth Element and Air Force One, amongst others during this period. 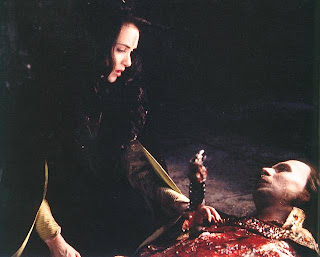 The movie deaths have slowed recently, although he's still had a fair few including Backwoods, Harry Potter and the Order of the Phoenix and Rain Fall. My favourite cause of death has to be in the otherwise disappointing Sin where he is seen slowly disappearing into quicksand. My least favourite is probably Harry Potter, so I must blame J.K. Rowling for that as she wrote it. I didn't think falling through a veil was a fitting finish for one of the most interesting and likeable characters in the series. It was very anticlimactic and seemed a bit weak and ineffective.
This large catalogue of movie deaths sometimes affects my viewings of Gary Oldman's films. For example, I was very surprised that he escaped awful horror flick The Unborn unscathed and I was totally convinced that Jim Gordon had died in The Dark Knight, even though this contradicted my prior knowledge of the character.
Whatever direction his movie career takes in the future, I'm sure he will continue to entertain and impress me. After all, whether his characters live or die, he still provides brilliant performances that I love to watch.
Posted by Emma at 10:04