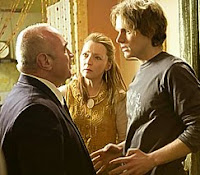 After Neil Hunter and Tom Hunsinger’s impressive film Lawless Heart back in 2001, the writer/director pair return with Sparkle, a fun romantic comedy about love lives, betrayal and quirks of fate. The latter plays a big part in the story, which at times feels like it has more coincidences than a Charles Dickens novel (and that’s an awful lot, in case you don’t know).


Sam Sparks, a bored young waiter meets Vince (Bob Hoskins) and his brother Bernie when they come to his restaurant. Their father has a stroke and Vince offers the London flat he used to live in to Sam, who can’t believe his luck as he has high ambitions for a top job in the city. Unfortunately, his Mom (Lesley Manville) decides to tag along in the hope that her singing career will take off, Vince doesn’t mind though, as he has taken quite a shine to her. Finding a job as a waiter thanks to Bernie, Sam then charms Sheila (Stockard Channing), an older lady he meets while working. They become lovers and he starts a job as her P.A. But then at one of Sheila’s parties, Sam meets the young, vibrant Kate and he finds himself falling in love. Things start to become very tangled indeed when Sam ends his affair with Sheila, it is revealed that she is Kate’s Mom and that Bernie is the Dad she never knew about (see what I mean about the coincidences?) I thought London was a massive city, but apparently it’s a small world after all.
Apart from this, I thought the film was funny and enjoyable, with some great performances from the entire main cast. With its many intertwining love stories, an alternative title could have been ‘Four Relationships and a Funeral’. Newcomer Shaun Evans has a tough job making Sam someone the audience wants to root for. At the start of the film he isn’t a very likeable character, he is rather arrogant and conceited. He does seem to genuinely care for Kate though, and when they meet there is a marked change in him. I like the scene towards the end when he is trying to prove his love and he tries to win a cuddly dolphin that Kate wanted earlier from the fair. A seemingly impossible task, he tries again and again and it makes you support him because he wants it so much.
Bob Hoskins plays Vince, a quiet, meek character who you feel real sympathy for throughout the film. I was very glad that he ended up happy as he was such a kind, loveable person. I also really liked Anthony Head’s character, Tony, who lifted the film with his warmth and humour. As a fan of Buffy the Vampire Slayer, it was nice to see one of my favourite actors from the series, and quite a departure for him to be playing a gay man after the stiff-upper-lipped librarian Giles.
There are little moments in the film when Hunter and Hunsinger‘s genius really sparkles (sorry, I just had to do it). My favourite scene is when Sam is preparing drinks in Sheila’s kitchen, a seemingly ordinary task, nothing wondrous about it. But as Kate watches through the banisters of the stairs, she slowly realises his betrayal. How? Because he knows where everything is kept. There are numerous white cupboards and drawers, yet he knows where to look for the things he needs. The only way he would know this is if he’d been in this kitchen many times before, and the only reason he would have been there is…
So, a charming little love story with some funny moments and something we all wish for: a happy ending. If you’re willing to overlook the inter-related elements that often stretch the believability, then you should enjoy this story and the many wonderful performances. A glistening film? A shining gem? A sparkling tale? Pick your own wordplay; they could all be used to describe Sparkle.