The first thought that the John Anderton of the short-story has is “I’m getting bald. Bald and fat and old.” This isn’t exactly the image of Anderton we’re presented with in the film. Played by Tom Cruise, he is young, confident and active (with a full head of hair, may I add). The general idea of the story remains intact though, with his name emerging as a future murderer. In the short story, they are punched on a card rather than the more visually pleasing ball rolling down the chute and popping out at the bottom to be collected.

The victim’s name is Leopold Kaplan, a completely different character to the Leo Crow of the movie. He is the retired General of the Army of the Federated Westbloc Alliance. He wants to discredit Precrime and take away their authority, giving control back to the Army. The Army receives duplicate information about the Precrimes and so he is aware that he is a target as soon as Anderton discovers he is supposedly going to kill him. 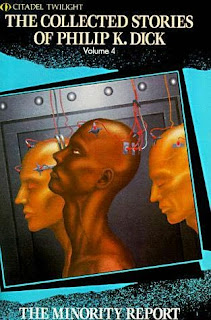 The three precogs in the short story are called Donna, Jerry and Mike. In the movie adaptation they are renamed Agatha, Dashiell and Arthur after the crime writers Agatha Christie, Dashiell Hammett and Arthur Conan Doyle. They were said to be children of drug addicts, which caused side effects leading to them having visions of future murders. They are deified by the Precrime detectives and the room they are kept in is called The Temple. Remaining immersed, their visions are projected as images onto the screens above them. In the short story they are significantly different, described as mutants with enlarged heads and wasted bodies. One paragraph tells of the process for gathering the information: “In the gloomy half-darkness the three idiots sat babbling. Every incoherent utterance, every random syllable, was analyzed, compared, reassembled in the form of visual symbols, transcribed on conventional punchcards, and ejected into various coded slots. All day long the idiots babbled, imprisoned in their special high-backed chairs, held in one rigid position by metal bands, and bundles of wiring, clamps.” There is a distinct lack of sympathy towards them, Anderton even refers to them as ‘deformed and retarded’ and they are kept in the ‘monkey block’ rather than the Temple.

The John Anderton of the short story finds out that ‘The existence of a majority logically implies a corresponding minority’. Learning that unanimity of all three precogs is a rarity, he goes back to read the minority report that could prove his innocence. But then, by proving his innocence, that would mean the destruction of the Precrime department he founded years ago. So he faces the same dilemma that Anderton does in the film and ultimately he makes a different choice.

Some notable additions in the film that are not from the original source material are the sub-plot concerning Anderton’s missing son, his kidnap of one of the precogs, his new eyes, his drug addiction and the numerous chases and evasions involving his old team members. For once I think these additions actually add something to the movie and do not seem out of place. The excitement, sympathy for the character and suspense they provide are what is needed from a modern sci-fi action thriller.
Posted by Emma at 10:32