The only two things that Philip K. Dick’s short story The Golden Man has in common with the film Next are the main character’s name and his ability to see into his future. This bodes well for my comparison!

In the story, Cris Johnson is 18 years old and has been hidden by his family all his life for fear the Government would take him away. In this future, there are people with a variety of mutations (think X-Men) who are feared, rounded up and eliminated. Cris has never spoken, he is golden and looks like a statue of a god. His ability allows him to see into the future, to all of the outcomes of his actions and all the different paths he could take. 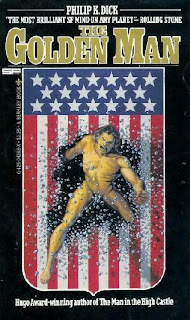 Captured by the Government, he uses his other survival ability – his irresistibility in the eyes of women – to woo one of the female agents into helping him escape. Tests on him uncover that he isn’t human after all; he is an animal that acts on instinct and does whatever it can to endure. With him on the loose, they believe the fate of the human race is in jeopardy. Women can’t control themselves around him, so he will pass this mutation on and can evade any attempts to recapture him because he’ll see every move they make that affects him.
The film that claims to be based on the story is completely different. Instead of a grim vision of the future where these homo-superiors threaten humanity and ordinary people are fearful of dying out, the film is set in present day. There is no mention that Cris’s ability may be a mutation, it is just seen as a special skill that he has. He also seems to be the only one who can do something out of the ordinary. 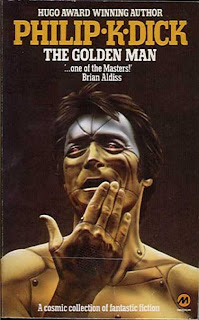 In Next, Cris is human, talks, is distinctly not golden and played by the less-than-godly Nicholas Cage. Rather than hunting him out of fear, it is the FBI who needs him to help them find a group of terrorists with a nuclear bomb.
The filmmakers seem to have taken his power from the story and, rather than making an interesting futuristic film about humanity in fear for its survival, instead decided to make an action film with a sci-fi element. Except this doesn’t fit all that well in the generic action film format, it leaves too many questions unanswered and it is left with an underlying feeling of missed opportunity.
Posted by Emma at 10:46