An essay on the visual style, narrative and themes of two Hitchcock films

The following is an edited version of an essay I wrote for my Film Studies degree.


'Examine the visual style, narrative form and thematic concerns of two of Hitchcock’s British thrillers (1927-38)'
During the period of 1927 – 1938, Alfred Hitchcock made a number of films in Britain including The Thirty Nine Steps (1935) and The Lady Vanishes (1938) which are part of his classic thriller sextet. Eric Rohmer and Claude Chabrol believe the sextet constitute a new cinematic genre; “This new genre – ‘le feuilleton d’espionage intelligent’ – produces a type of film characterisable in terms of an abundance of action, chases and journeys, a variety of locales, gloomy and macabre plots.”
The visual style of Hitchcock’s British thrillers is very realistic. Everyday locales such as the crofter’s cabin in The Thirty Nine Steps; a detailed depiction of a lower middle class setting, and the inn in The Lady Vanishes, are very authentic. Tom Ryall states that “Hitchcock’s early training as a set designer undoubtedly contributes to such a detailed use of the mise en scene to achieve surface realism.” 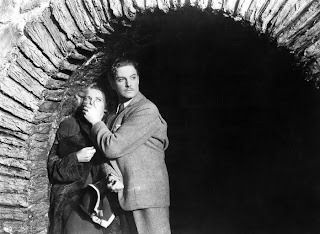 Hitchcock also uses innovative sound and editing techniques to add to the effect of the visuals. In The Thirty Nine Steps, there is a shot of the landlady’s screaming face and the sound of a train whistle, then the scene cuts to an actual train: the source of the whistle. Bordwell and Thomson believe this nonfaithful sound has a serious function; “Though the whistle is not a faithful sound for an image of a screaming person, it provides a dramatic transition. Fidelity of sound to source is a strong convention of classical cinema and here Hitchcock deviates from it in order to provide a ‘striking transition’ between two disparate images.”
There are also memorable visuals from the film The Lady Vanishes. The ‘stain’ – a type of Hitchcockian prop where everything is proceeding normally until someone notices something that isn’t right – is present here. In this film it is the packaging of Miss Froy’s herbal tea, which is thrown out from the train with the rubbish and blows against the window in front of Gilbert for a few seconds, before blowing away. This convinces Gilbert that Iris was telling the truth about Miss Froy. Another clever visual used is the word ‘FROY’ written on the window, it is visible throughout the scene where Iris sits with Gilbert until she notices it, and then it disappears. 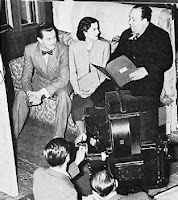 Both The Thirty Nine Steps and The Lady Vanishes are full of Hitchcock motifs; the long knife used in the fight sequence with the illusionist, the birds that are let loose in the luggage compartment and cause chaos, the long corridors, trains, public buildings like the music hall and the London Palladium, etc. Elisabeth Weis discusses the links between the images and sounds in Hitchcock’s films; “his soundtrack is also distinctively contrapuntal to the visuals. That is to say, the sounds and images rarely duplicate and often contrast with each other. During a Hitchcock film we are typically looking at one thing or person while listening to another.” There is an example of this in The Thirty Nine Steps where we hear the crofter saying a blessing before supper but what we see is his wife anxiously looking at the newspaper headline and then at Hannay.
In Hitchcock’s films, elements of the mise en scene are often used to great effect in order to further the narrative. In The Thirty Nine Steps, the crofter’s wife gives Hannay her husband’s coat to wear to disguise himself when he runs away from the police. This saves his life later in the film when he is shot by the professor at the country house. He is saved by the Bible the crofter kept in the coat’s breast pocket. In The Lady Vanishes it is the herbal tea packet that convinces Gilbert that Iris is telling the truth about Miss Froy.
A difference in the narrative form is the episodic structure of The Thirty Nine Steps which has lots of different locations; the music hall, Hannay’s apartment, the train, the Scottish Highlands, the crofter’s cabin, the country house, the town hall, the sheriff’s office, the inn, the London Palladium. In The Lady Vanishes there are much fewer locations, there is a clear divide between the beginning of the film, the middle, and the end; these are set in the inn, the train, and the government offices. 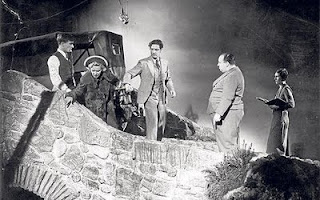 Tom Ryall notes another difference between these two films; “In The Thirty Nine Steps, the initial emphasis is on the male character (Hannay) with the woman (Pamela) a sceptical and unwilling partner in the adventures until the later stages of the film. The Lady Vanishes reverses this pattern with the woman (Iris Henderson) in the central position to begin with and the man (Gilbert) playing the sceptical and unwilling partner for part of the film.”

Although some of the films in Hitchcock’s classic sextet deviated from the spy thriller genre, the final film in the sextet, The Lady Vanishes saw a return to it. The Thirty Nine Steps and The Lady Vanishes have similar themes in that they are both espionage films with some comic and romantic elements, and they both deal with a conspiracy.

In both of the films, the role of the ‘hero’ is occupied by individuals who have been involved in the espionage situation by accident. Both of the protagonists are ‘ordinary people’ who have been drawn into the world of espionage by accident and they are somewhat forced to occupy these heroic roles because the real spies are unable to do so. 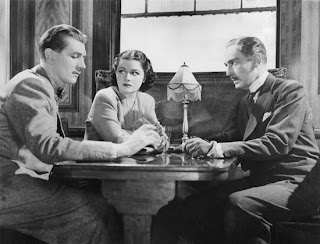 A major theme in The Thirty Nine Steps is that of the falsely accused hero. Hannay is an innocent man who has been accused of murdering a young woman and has gone on the run from the police. This theme is also present in The Lady Vanishes as Iris is accused of lying or possible madness by many of the passengers on the train as they don’t believe she’s telling the truth about Miss Froy. The hero’s purpose in both of the films is to try to prove they are telling the truth.
Overall, Hitchcock’s classic British thrillers of this period all offer the spectator an adventurous and intriguing story. The films provide an innovative visual style, an interesting narrative and a number of themes that became indicative of Hitchcock’s work. Audiences flocked to see ‘the new Hitchcock movie’ because they knew they wouldn’t be disappointed.
Bibliography

Filmography
Alfred Hitchcock is the subject of Director's Chair #11 over at The LAMB
Posted by Emma at 12:58