The following is an edited version of an essay I wrote during my Film Studies degree course.
'It has been argued that Hitchcock’s films imply male spectatorship and a worldview which is both homophobic and misogynistic. Discuss this statement applying theoretical models studied on the module to specific examples of Hitchcock films.'
Alfred Hitchcock’s films often tend to divide audiences in terms of their message concerning the treatment of women and homosexuals. Many feminist critics believe that his films include misogynism; for example, Laura Mulvey says that “Hitchcock is seen as a director who turned women into passive objects of male voyeurism and sadistic impulses.”
In her essay, entitled ‘Visual Pleasure and Narrative Cinema’, Mulvey presents her theory on it. She suggests there are two distinct pleasures that we as spectators experience when we watch films at the cinema. One is scopophilia; where we sit in the dark and look in on someone else’s world, the other is narcissism; where we identify with what is on the screen. Mulvey believes that women are presented as the image and men as the bearer of the look, that pleasure in looking is male dominated. She also believes that males are active because they further the narrative through their POV shots and looks. However, females are passive because they are arranged as an icon to be looked at and they don’t tend to further the narrative.

Hitchcock’s films often include examples of the mistreatment of women, with them either being killed, or controlled by men; like in Marnie, Vertigo, North by Northwest, etc. 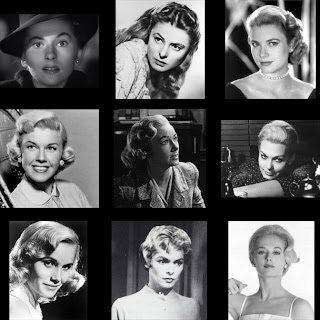 In Vertigo, when the spectator sees Madeleine for the first time, it is through the eyes of James Stewart’s character, Scottie. The camera repeatedly cuts between shots of him and his POV shots of Madeleine as he sits and watches her. According to Mulvey’s theory, Scottie is controlling events, the audience sees everything through his eyes, and Madeleine is the object of his and our gaze. Mulvey states that “we, the audience, vicariously enjoy the pleasure in looking through scopophilia and identifying with the male gaze”.

Scottie treatment of Judy later in the film is also questionable. He controls Judy; even though she doesn’t want the suit he picks out for her, he forces her into it. She caves in under his pressure, saying: “I’ll wear the darned clothes if you want me to...if you’ll just like me.”
Scottie still isn’t satisfied though, he says to her: “The colour of your hair.” Then: “Judy, please. It can’t matter to you.” His choice of words suggests Judy doesn’t care about her appearance, that he can just choose to change everything about her and she won’t mind. Judy passively says to him: “If I let you change me, will that do it? If I do what you tell me...will you love me?”

There are also examples of male voyeurism and misogyny in Psycho. The policeman who walks up to Marion’s car is a menacing-looking authority figure whose watchful eyes are disguised behind his large, dark sunglasses. As he peers in through the window a POV shot shows Marion asleep on the front seat. This is very voyeuristic as sleeping is considered private and he, a stranger, is looking in on her without her knowing.

Later, when Norman is in his parlour, there is a shot of him looking through a small hole in the wall. His room is in darkness, the light through the hole illuminates just his eye as he peers through it. There is a cut to his POV shot; he is watching Marion in her room undressing. A cut to an extreme close-up of Norman’s eye as he spies on Marion is very voyeuristic. Marion is unknowingly the object of his and the spectator’s gaze.

Along with criticism from feminist critics for being misogynistic, Hitchcock’s films have also been accused of being homophobic. Gay criticism focuses on the covert gay representation of characters and the fact that these characters are seen as deviant.

In Rope it is Brandon and Philip’s relationship which is coded as gay. When asked where the telephone is, Brandon says it is in the bedroom. The woman then replies “how cosy”. This implies there is only one bedroom, which the two men share. Philip relies on Brandon a lot throughout the film. Brandon seems to be the one who is more in control. They are both deviant characters, Brandon more so than Philip as he seems to become mentally unstable towards the end of the film. 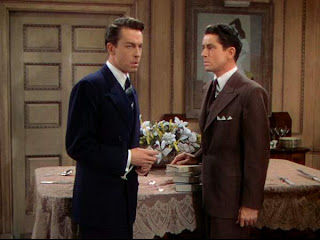 In North by Northwest, there are suggestions that sinister right-hand man Leonard may be gay. When he is first introduced, Vandamm says to him “Ah Leonard, have you met our distinguished guest?” to which Leonard replies “He’s a well-tailored one, isn’t he?” It’s strange that when Vandamm asks Leonard’s opinion of Roger Thornhill, all he remarks upon is his fashionable wardrobe. Later in the scene, Leonard doesn’t get involved in the struggle with Thornhill, he leaves that to the two other men, who seem more ‘macho’.

In a conversation together, Leonard says to Vandamm: “Call it my ‘woman’s intuition’ if you will, but I’ve never trusted neatness.” This suggests a feminine side to his personality. Vandamm then says to him: “You know what I think? I think you’re jealous. No, I mean it. I’m very touched.” He never wanted Vandamm to get involved with Eve; throughout the film he seems to dislike their relationship, which backs up a theory of jealousy.

Although there is evidence that supports the idea that Hitchcock’s films are homophobic and misogynistic, there is also some evidence to the contrary. It is true that women are mistreated in some of Hitchcock’s films (in The Birds, Marnie, and Vertigo, amongst others) but that isn’t to say that the men get off easily. There are male deaths and men are mistreated in films such as Rear Window (broken leg) and Vertigo (acrophobic). 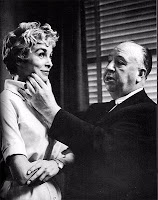 Hitchcock has many supporters who challenge the criticism he receives. In Robin Wood’s book, Hitchcock films revisited, he attempts to minimise the misogyny in them and to analyze both Rear Window and Vertigo as exposes of the twisted logic of patriarchy, relatively untroubled by ambivalence or contradiction.

David Spoto attempted to link Hitchcock’s representation of gays with his own life and his ambivalence towards homosexuality but suggested that it was not undertaken in a particularly obvious way. This shows that Hitchcock wasn’t personally homophobic, which suggests his films wouldn’t purposefully imply that homosexuals were deviant.

Tania Modleski writes: “what I want to argue is neither that Hitchcock is utterly misogynistic nor that he is largely sympathetic to women and their plight in patriarchy.” I tend to agree with this, because even though the women in Hitchcock’s films seem to get a raw deal on occasions, this isn’t always the case. Sometimes they are the heroines of the film, like in The Lady Vanishes. Sometimes they are strong-willed and confident, like in The Birds. Whilst some of Hitchcock’s films do seem to imply a homophobic and misogynistic worldview, I don’t believe these implications are intentional as there are also many instances to the contrary.


Head over to The LAMB for Director's Chair #11 for more on Alfred Hitchcock
Posted by Emma at 14:42