Back with another great shot, this week it's from one of the best action films of all time, which set the benchmark for the many that followed;
Shot from the Screen: Die Hard
Screenshot: John McClane, jumping off the Nakatomi Plaza building just as the roof explodes
Shot from the Scene: Hans Gruber plans to make his escape with the contents of the vault and sends the hostages up to the roof. McClane saves them by scaring them back downstairs but is fired upon by FBI agents in a helicopter. Jumping to momentary safety, he seemingly has nowhere else to go. There is a feeling of vertigo as McClane stands unsteadily on the edge of the building, then panic as we see the helicopter appear behind him, its occupants ready to shoot once again. With a fire hose tied around his waist, he leaps from the roof with seconds to spare as Hans presses the button and triggers the explosion 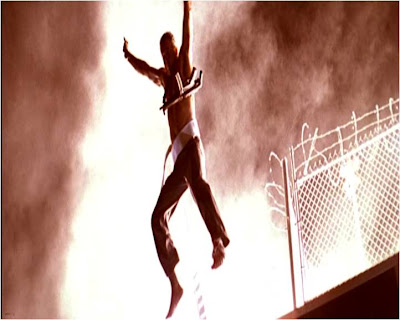